How does Depth of Discharge factor into Grid Connected battery systems? 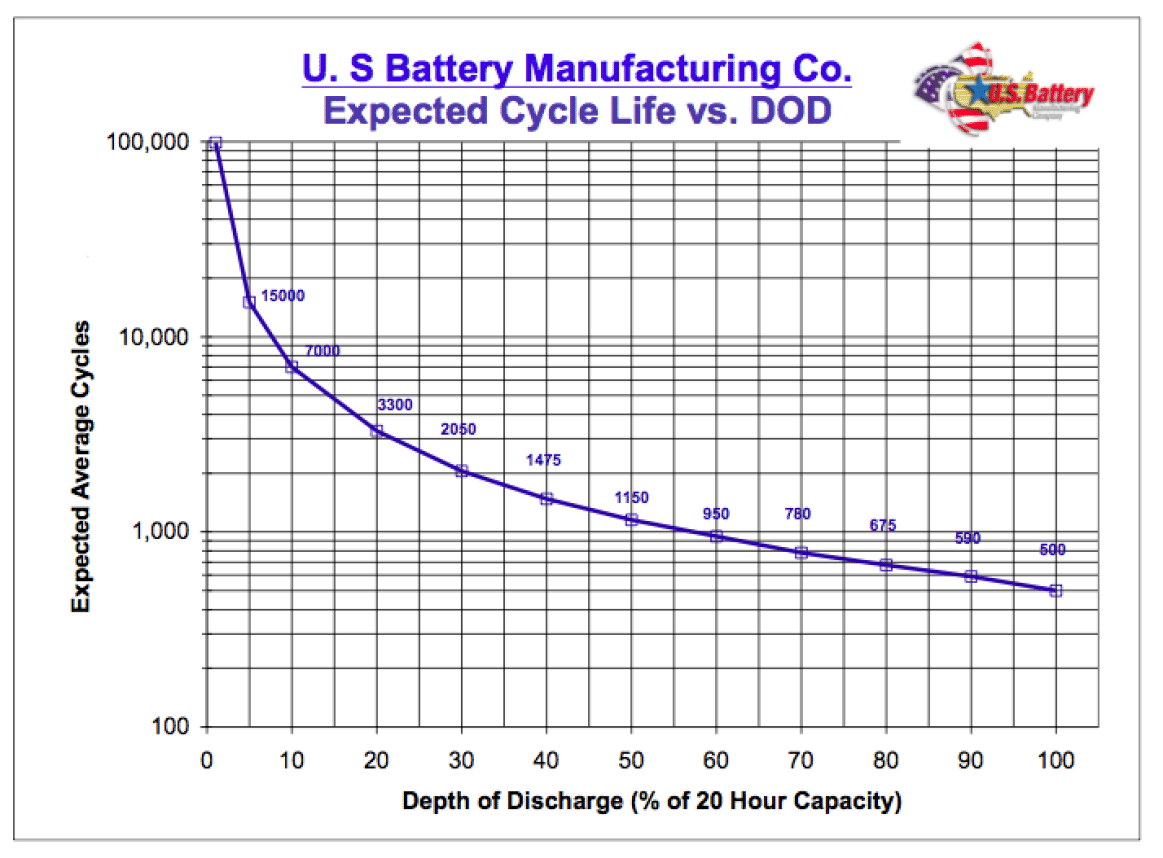 In order to design a battery that will last and provide reliable service for its full rated life, there are several criteria to consider, some of which have already been covered in our Battery O&M article. Operating temperature, voltage, charging and discharging rates as well as planned depth of discharge and days of autonomy are all key terms that are factored into the battery size and type – but one of these items, Depth of Discharge (DOD), has a prominent effect on the lifespan of the battery. DOD is very closely linked with Cycle Life – or the number of discharge cycles a battery can complete before being reduced to 80% of its original capacity (the point at which a battery is considered to have passed its useful life). Although the most common type of battery chemistry for solar use is lead acid, DOD affects every battery chemistry to some extent.

It is very common to hear of battery designers simply doubling the size of a battery based on calculated loads and discharge duration to achieve a 50% DOD and arrive at an overall battery size and budget. For the lead acid battery, this is but the starting point.

Generally speaking, there are two types of deep cycle solar connected batteries.  The most common is the Off Grid battery that cycles every day and has enough size to weather extended low irradiance. The second most common is a battery sized for occasional backup and reserve power – also notably with Grid Tied AC coupled systems.

Assuming the loads and days of autonomy are already known, how does an AC coupled back up battery differ in size from an off grid battery?  The battery is an array of cells – in series and parallel. Each cell is a chemical reaction and if the chemical reaction can be kept within a sustainable window, then the capacity of each cell to support the reaction can stay strong for the full rated life of the battery and even longer.

Here is a typical plot of battery life cycles vs. DOD. At 50% DOD, the referenced battery is expected to last 1150 cycles before its capacity is reduced to 80% of original, but at 20% DOD per cycle, the battery could be expected to last 3300 cycles (or 9 years at 1 cycle per day) – which is a respectable design target for an Off Grid battery.

Keeping the cycle life of a battery in mind – what is a more accurate guideline than the “50% rule”? For off grid applications, where the battery can be expected to cycle every day, a better guideline would be to design to a DOD of 20%, not 50%.

For grid tied systems with batteries used for backup only, DOD can be taken much further since the grid can be expected to cover at least some of days that the system is running and hopefully most of them – we don’t want to plan for 100% DOD – extreme discharging can permanently damage a battery. But if we planned for 80% DOD that would allow us 675 cycles, and it’s unlikely that we’d experience 675 days of power outages in a 10 year period.

In summary, when designing a battery for backup use, Depth of Discharge can be set considerably lower that when designing a battery for daily, cycling use. So, for example, if a system with 500Ah of projected demand is connected to a relatively healthy grid, with only occasional outages expected, and the battery is a high quality deep cycle battery, what might have been a 1000Ah battery with a 50% DOD design, can now be a 600Ah battery with a periodic discharge of 80% - a substantial savings in cost and space.