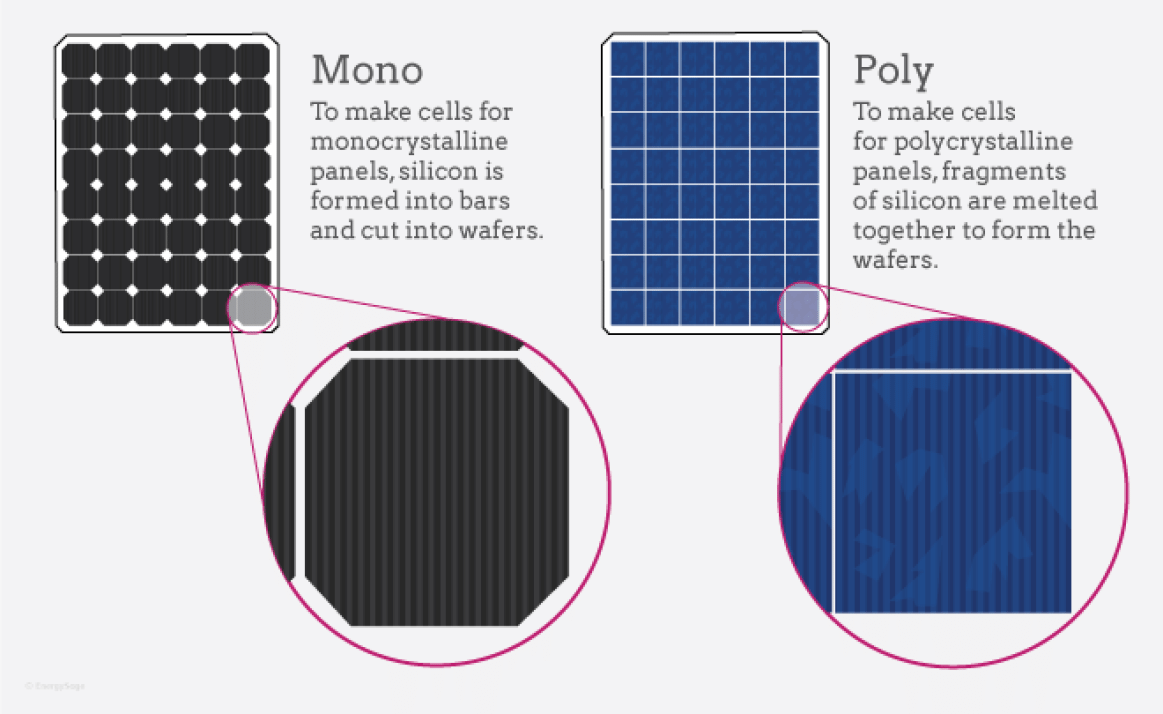 ​Even though monocrystalline and polycrystalline solar cells serve the primary function of converting the sun’s rays into usable electricity, both distributors and installers have separated the two types of solar modules based on aesthetics and price. Polycrystalline modules are easily distinguished by their blue cells that resemble a camouflage of molten silicon. Conversely, monocrystalline cells typically are uniform in their appearance because they come from a single silicon ingot.

In terms of price, the cost of producing polycrystalline used to be significantly lower than its counterpart. However, monocrystalline panels accounted for 38 percent of all modules produced in 2017, up from 25 percent in 2015. As monocrystalline cell manufacturing continues to benefit from economies of scale, the mono vs. poly debate will shift to incorporate other aspects of the technology.

It has been established that polycells are generally less expensive and have a bluish hue to them, but why is that the case? The answer lies in the first step of manufacturing a solar module: melting silicon to create an ingot or a rectangular mold. Manufacturers load approximately 1,300 pounds of silicon rocks into a quartz mold to create an ingot. The rocks are heated to 2,450 degrees Fahrenheit (¼ the temperature of the sun’s surface) for approximately 20 hours before cooling for up to 3 days. The resulting ingot is sliced into narrow cells and results in a polycrystalline structure. Watch the video below for a detailed look into the process:

Monocrystalline cells are manufactured using the Czochralski process. The method was developed by Polish scientist Jan Czochralski in 1916 while investigating the crystallization rates of various metals. The method melts down polysilicon, introduces a seed crystal, and pulls the crystal upwards to create a uniform silicon rod free of impurities. The cone-shaped rod is then cut into individual cells with rounded corners to minimize waste. The video below details the process:

Besides these manufacturing differences, mono and poly cells have slightly different efficiencies, temperature characteristics, and shading properties. Because a monocrystalline panel is composed of a single crystal, electrons have more room to flow. This lack of resistance also leads to a slightly lower temperature coefficient compared to polycrystalline modules. Finally, monocrystalline modules tend to produce more in the later hours of the day.

Polycrystalline modules make sense for cost-sensitive projects that are not limited by space; however, as the price gap between these two cells continues to shrink, the value proposition of monocrystalline modules becomes more compelling. Modules that contain higher power densities ultimately result in lower balance-of-system costs and higher energy yields.  Consequently, many module manufacturers are transitioning their lines to include more monocrystalline offerings.

To learn more about Greentech Renewables' full line-up of Tier-1 polycrystalline and monocrystalline modules, be sure to reach out to your Account Manager or contact us today.

How Products are Made