When To Fuse, When not to Fuse? 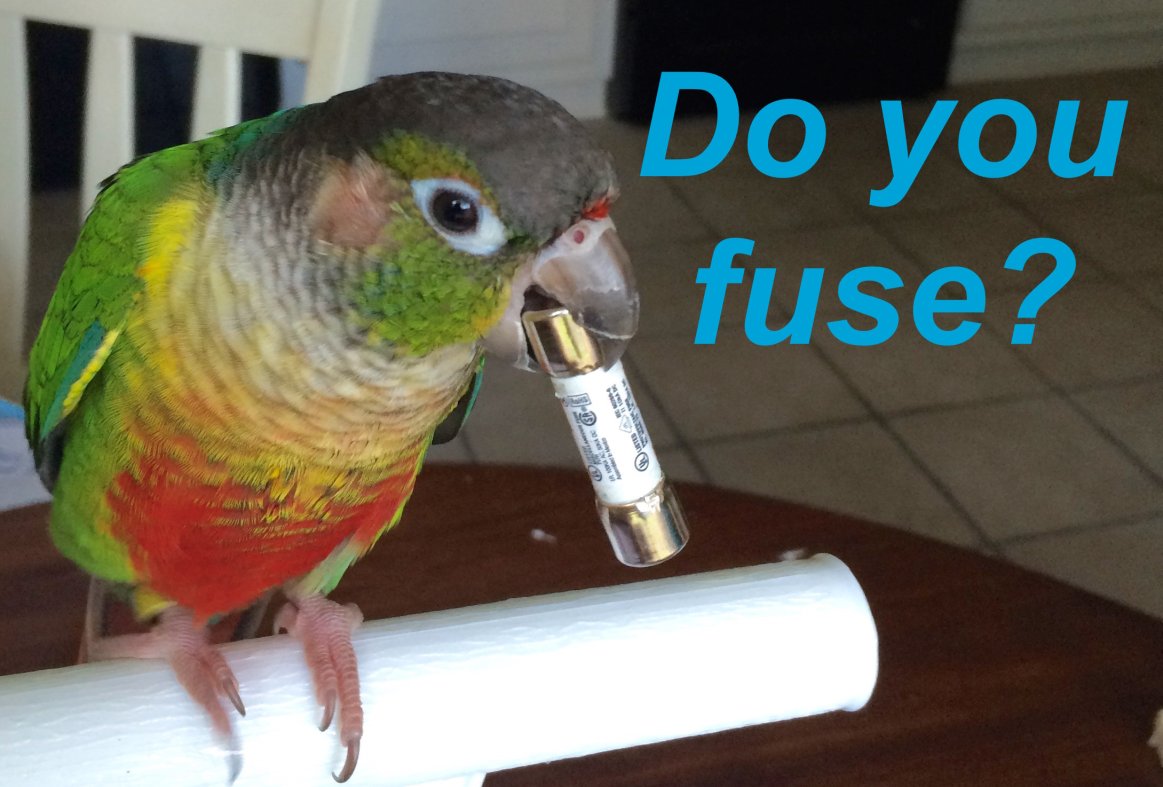 Determining when fuses are required at PV string outputs and when they are not is often not as clearly defined.  Here I will show how to determine this easily, to help avoid a potential problem, and to save on unnecessary or redundant components in a system.

A common question that we encounter with our customers is whether or not their string inverter comes with string fuses.  The answer to this, depends on the manufacturer.  Some of those include strings fuses whether you will be using them or not and others just provide placeholders for them if you choose to install them or not.  I will explain the reason for this inconsistency.

We all know that the purpose of having fuses, primarily, are to protect the wire and, secondarily, to protect the electrical equipment.  It would seem to be a no brainer to fuse every PV source regardless, but that may be redundant in smaller single or two string systems.  The reason for this is that module manufactures are required to have integrated over-current protection devices (OCPD) of a minimum of 1.56 times their short-circuit current (ISC).

Therefore, in a single string system there is no other OCPD needed at the string output since it is already protected by its internal fusing and no other source of current would be present to backfeed through this circuit

Now let’s evaluate a system where there are three strings of modules connected in parallel to determine whether or not fusing would be a requirement.  If a fault were to present itself in one string the other two healthy strings could force their currents through the faulted string.  This implies that 2.5 times the Isc rating of the modules could be forced through the faulty string.  In many cases the integrated OCPD of the faulted string would be exceeded, requiring that there be fuses present on the output of each string to protect the wiring and equipment from damage.

That covers the topic of when to fuse and when you may opt not to use them.  Let’s, for a moment, look at two examples where we should sharpen our pencils and evaluate a system to determine if we should need additional fuses or if we can safely avoid them.

We are using this module below in a three string system: 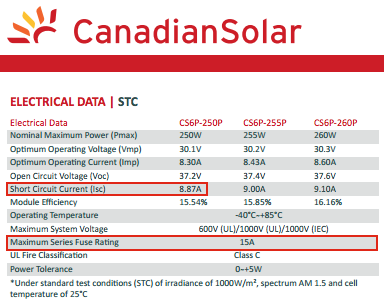 If a fault occurs in one string would there be a need for each string in the system to be fused in order to protect the circuit?

So in this scenario we would be required to have fuses on the output of each string to protect for a fault if this ever were to occur in the system.

In this system we are using the module below in a three string system: 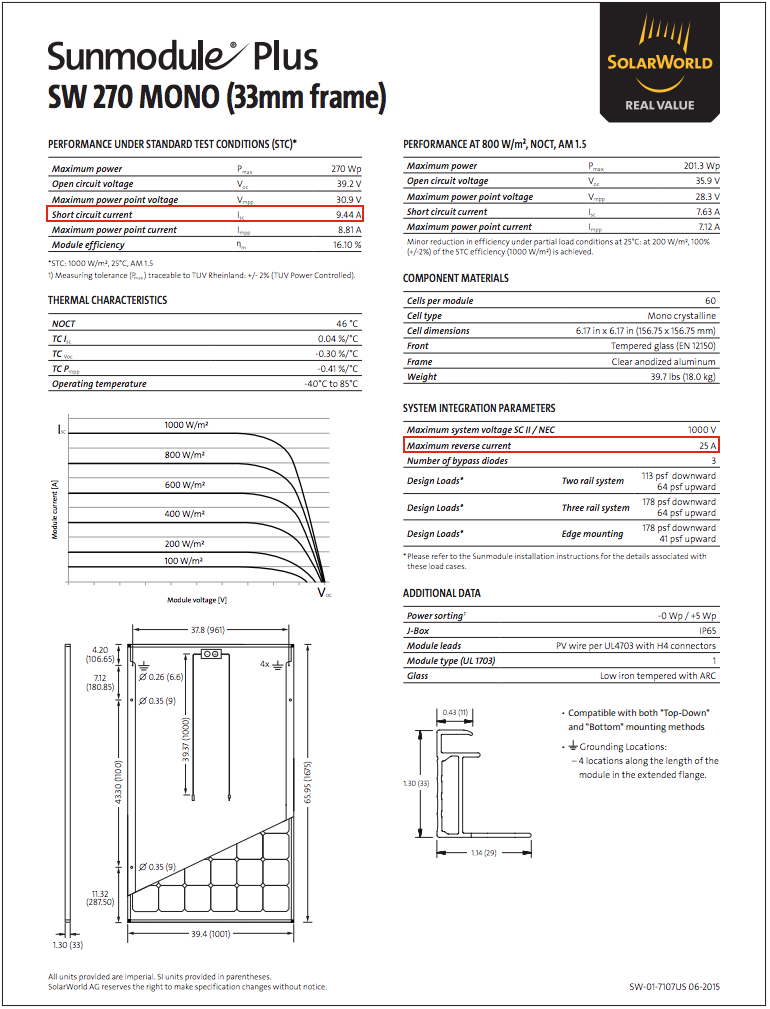 Now, were a fault to occur in one string in this system do you think we need to have fuses on each strings output?  Let’s discover the answer.

As you can see in this example you could omit fuses on the output of each string, all thanks to the rating of the OCPD of the modules.  I chose to show this example because it illustrates that careful evaluation of the modules in the system can help to not only determine when to fuse but also that in certain situations where you may think it is necessary it turns out that it may not.  Considering these variables helps you to ensure that your circuits are indeed protected and in turn could save you from having to add fuses to the circuit outputs when it is redundant or unnecessary.

Hi there,
great small article for good insight. Can you please advise what size fuse should be used in both cases? same as panel's maximum series fuse rating?
Thanks

·        Use the 20 Amp fuse (As long as the inspector agrees! If the inspector doesn’t agree, then you may need to change the modules.)

Note: There are cases where fusing is not even needed according to the NEC. This is defined in article 690.9(A) of the NEC.

If you would like to look into a specific case, please contact Fronius Tech Support at pv-support-usa@fronius.com

There is one thing that is not covered here, and that is that fuses and/or other protective devices may be inside the inverter, and then, at least in my case, I would need to break the warranty sticker. Just te replace a stupid little fuse. Making it a very expensive replacement.

Sorry for your frustration with this. We would recommend that you reach out to the manufacturer directly and talk to their tech support on the best way to proceed.

Thanks for reaching out.

Hi, tks for sharing, I have the following issue, I've installed a PV system with two string of solar panel with a fuse (15 A) for each string, and a fuse at positive electrode of batteries below the inverter. There was an overload of the system because a big electrical engine was connected, and I'm far away of the installation point, and I ask my self all the fuses can be damage? Because the inverter is dead

Thank you for your comment. We have a few questions to help us answer what you're looking to do. Assuming the ‘engine’ referred to is a large load, it could be that the battery fuse blew as the battery tried to provide enough current to allow the system to power the large load. If so, perhaps the battery is disconnected. However, the thought is that the PV fuses would not have blown and there would be some source of DC power for the inverter but not sure how the hybrid inverter would handle the battery disconnection.

Regarding the battery is dead comment, does that mean shut down so no communication? If the ‘engine’ was a generator, then not sure what might happen if it began back feeding the inverter, but actual damage could occur. Thank you for your additional clarity.

Hi, if the NEC requires 1.56 factor when calculating fuse size then why does your example use 1.25 factor? I've seen both of these factors used on many websites for what seemed to be for the same calculation. Also, your example says you are using 3 strings yet your fuse calculation uses 2 (i.e. isc x 2 x 1.25). Is this a typo or am I missing something? Of all the PV stuff I've learned this area is most confusing so your help would be appreciated. Thanks!